Treemap hierarchy and how to deal with small leaf size 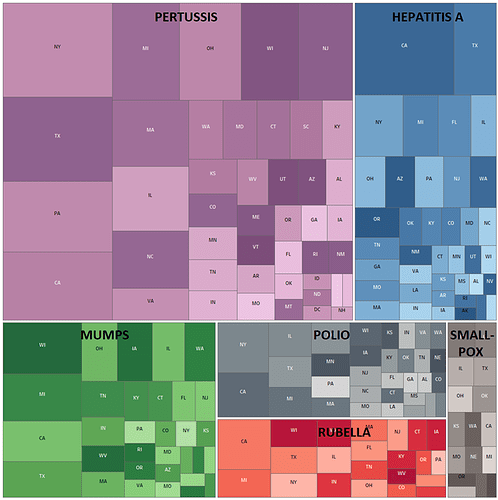 Unique observation:
Contrary to what one might expect, the total number of disease cases doesn’t appear to be correlated with the number of occurrences per 100.000 people. This might be worth a further investigation as I have yet to find the explanation.

Data preparation: States with less than 500 cases of a certain disease have been excluded to preserve the clarity of the visualisation.

In information visualization and computing, treemapping is a method for displaying hierarchical data using nested figures, usually rectangles. Treemaps display hierarchical (tree-structured) data as a set of nested rectangles. Each branch of the tree is given a rectangle, which is then tiled with smaller rectangles representing sub-branches. A leaf node's rectangle has an area proportional to a specified dimension of the data . Often the leaf nodes are colored to show a separate dimension of the...

Questions:
Is the hierarchy of my treemap correct?
How should I deal with the nodes too small to include a label on them?
Is filtering out the small part of the dataset as I did, in this case, a good approach? (Filtered out stated with less then 100 cases of a given disease)

The hierarchy looks correct to me.The way you’ve approached the matter of dealing with small leaf size can be a good and a bad thing depending on the data you’re using.
In some cases filtering out parts of data can lead to misleading results and distorted representations.
In your case it doesn’t appear to have a negative effect on the visualisation and I can imagine, it improved the clarity of the image a lot.
Sometimes it will not be possible to label every leaf and that’s ok, it’s how treemaps work when converted to static image and it’s why they’re better as an interactive visualisation. When you’re modifying the data for the purpose of visualising it, remember to always mention the alterations you’ve made.