Hello there, I’m a student from Swansea University looking to get feedback for my visualisation I have created for a coursework.
Image: 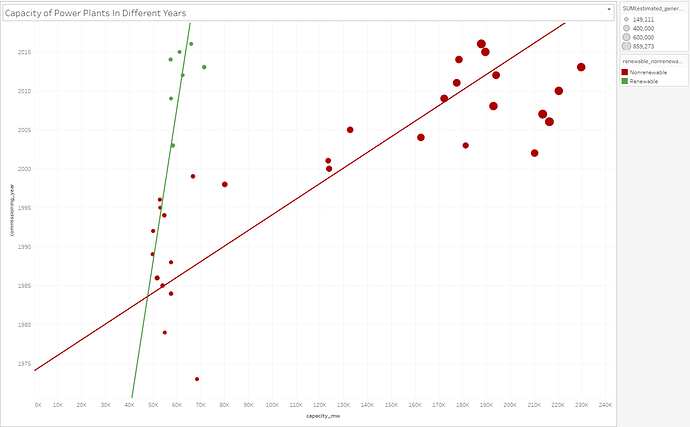 Visual Mappings: SUM(capacity_mw) in the x axis and commissioning_year in the y axis. SUM(estimated_generation_gwh) represents the size of each plot and colour is used to show renewable/nonrenewable energy output.

Unique Observation: The scatter gives a visual depiction of how both power capacity and estimated power output in power plants is directly correlated to the years going by. We can also see that the commissioning of renewable power sources started to increase from 2003 onward however power output is not as big as conventional nonrenewable fuel sources.

Data Preparation: Aggregating fuel types into either renewable or nonrenewable. Ignoring of NULL values in the commission_year dimension.

Question:
I feel like including the estimated power generation (size) is somewhat redundant because of its similarity to the capacity dimension. Is there a way to contrast the two dimensions in order to pick up on minute differences?

Would there be a more suitable visualisation technique for this data?

Hey there, as a first point I think I would switch the x and y around because time is found alot more commonly on the x-axis.

As for your question, even now i have trouble understanding exacly what capacity_mw is, as far as I understand its the amount of power generated from a certain powerplant so that has only confused me more. I would kind of agree and exclude power generation from size.