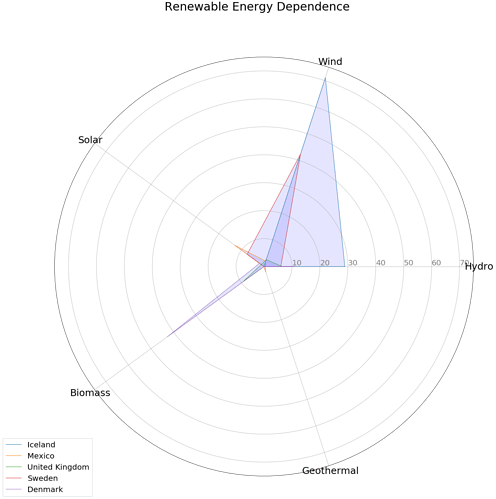 Using the power plant dataset found here, I calculated the percentage breakdown of which sources generated each country’s power. I then filtered these values to only include the five renewable energy sources I was interested in plotting.

Each of these energy types is then encoded onto its axis between 0 and a limit I set.

As these values all have a theoretical maximum of 100 (If a country generated all of its power from one source) I first decided to simply set the plot limit to 100, however as the actual maximum value is around 70 and the average much lower, this made all data too small and hard to interpret.
I then tried to set the limit of the plot to the maximum value provided from the data set, however as this was not a particularly round number, reading the chart was rather hard, compromising I set the limit to 75.

As such I ask the following questions:

A suggestion based on experience is that you can change the axis scale to logarithmic function, i believe this will help answer your first and second question.

IMHO, you can add a table alongside to show the count (to show precise count), but I am still able to tell roughly the amounts.

This is an interesting implementation of a radar plot, and I think it presents very well the role renewable sources play in providing power to countries.
I also think that setting a limit of 75% is sensible, and I do not believe a categorical approach would be best for analysis here. However, rather than steps of 10%, possibly try fewer steps of say 15%.

I would also say that it’s rather hard to distinguish the smaller producing countries in this chart whilst being overlapped by other charts with the same background colour.