Hello, I am a student as Swansea University and I have been given the task of creating data visualizations for the global power plant database (GPPD). http://datasets.wri.org/dataset/globalpowerplantdatabase
I’d like to know how can my visual design be improved? or Any other ways that I could visualize the distribution of renewable energy fuel sources across Great Britain? 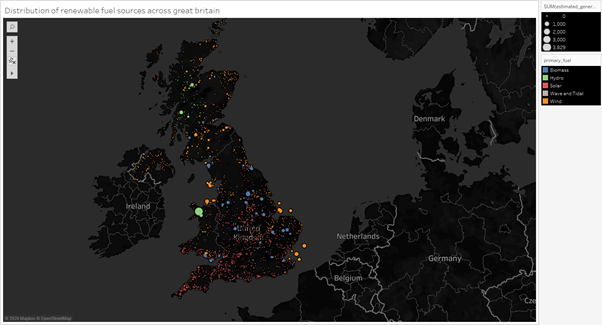 Symbol Maps
[1] Proportional symbol maps visualize numerical data associated with point locations by placing a scaled symbol—typically an opaque disk or square—at the corresponding point on a map. The area of each symbol is proportional to the numerical value associated with its location.

The visualisation displays the distribution of the renewable fuel sources in great Britain and from this distribution it can be seen that in the south closer to the equator there is a large amount of solar power plants, in comparison to the north where there is a lot more wind used as a fuel source including lots of hydro fuel sources on the west coast of Scotland, this is a good representation to show how environmental factors are considered for each fuel source built. Also despite the large amount of Solar fuel sources, none seem to have a particularly large estimated generation (GWH).

Hey Adam, you’ve made an interesting visualization as it highlights areas that predominately use 1 type of renewable energy (e.g. south using solar). If I would to make any suggestions, it would be to focus the image so that the data points are easier to read by possibly transforming your image to be a landscape version of the UK. Another would be to possibly include other_fuel power stations in the visualization but I know from experience that it can be quite difficult. Other than that, nice work!