I am a final year computer science student in Swansea and I have a question related to one of the visual representations that I had to build for one of my assignments.
The details are as following: 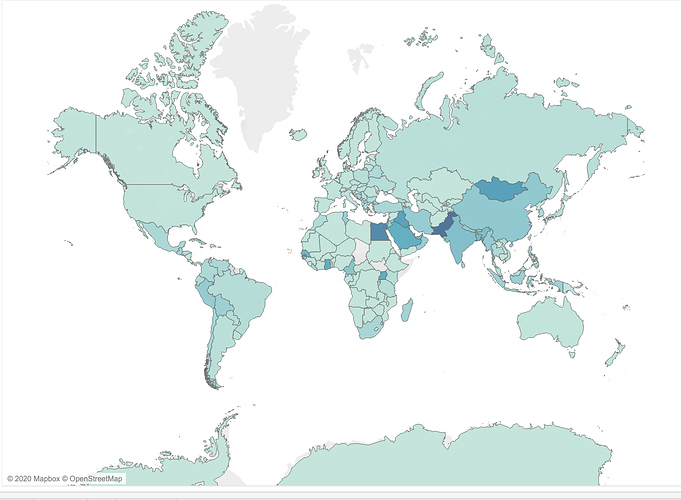 In terms of colors the mapping is conducted through a gradient descent of blue.

It outlines the pollution index in regards to the countries on the globe.

Observations in regards to the digital map are the following:

Quality of air is very low in South Asia in particular and is behind Europe and North America.

In terms of data I have added a new data set that reflects the pollution level on each country, thus the demonstration in the digital map of pollution levels on countries.

In terms of marks I am using all Countries which I am not filtering, in order to observe the distribution of pollution on all countries.

Is there a better way to express the data in a more appealing color pallet ?

Do the neighboring countries influence the level of pollution in once own country? It would be interesting to observe specific areas of countries to depict if the pollution is coming from the borders of the certain country or if it is simply caused by plants owned domestically.

Looking forward to any reply.

In regards to the colour palette, I am thinking you can apply a logarithmic function so that you can spread the distribution better. There is barely any difference noticeable in between Russia and the rest of Europe for example.

I really like the idea behind your graph, it is interesting to see how pollution is spread over countries.