Hello,
I created a stacked bar chart to show the countries with the least amount of power generated (in gwh), which also shows the percentage of what different fuel types generates for each country, and I am uncertain about how I should further approach designing this visualisation.

Thanks in advance : D 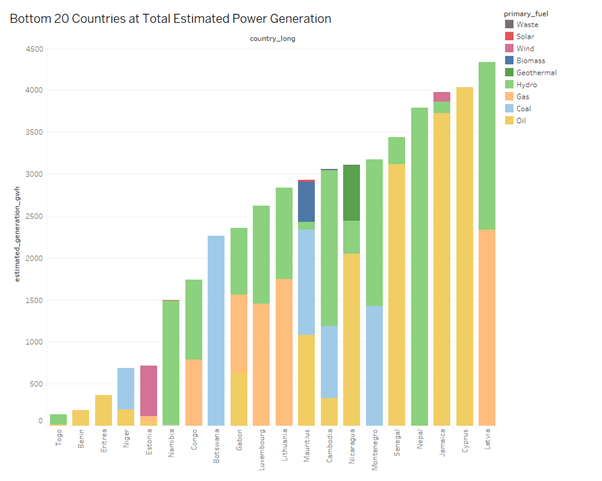 Unique Observations:
Togo is the country with least amount of estimated power generated, most of which is generated via hydropower.
It is then followed up by Benin and Eritrea as second and third countries with the smallest power generation respectively, and they solely rely on oil for power generation.
Power generation in Botswana is entirely dependent on coal as primary fuel, and Nepal only uses hydropower.
Cyprus seems to be the highest generating country out of the 20 that only rely on one primary fuel, which is Oil.
Oil and hydropower seems to be the most used primary fuels between these 20 countries.
Data Preparation:
Filters applied to Stacked bar chart to remove null values and restrict the amount of countries shown.

Questions:
Would this visualization benefit from implementing additional visualizations, or is it clear enough and present enough insightful information?

There are about 69 countries that have null values for ‘estimated_generation_gwh’ (and have been filtered off from the visualization), would not knowing if these countries could have lower power generations than what is known invalidate the visualization?

For some countries, the generation of some fuel types is 0, should values below 1 be filtered to remove irrelevant data from the visualization?

First of all, I believe that it does show insightful information, and that its okay to restrict it to 20 countries, as you’ve clearly stated in the title that that’s what the graph is intended to show.
In terms of showing all the countries, I don’t believe that this would make the visualisation clearer, as it would just add more columns and make it harder to read/ pick out each individual country.
As long as you made it clear that this was based on a certain data set, i.e. make the title “Bottom 20 countries… based on reported figures 2013-2017”, the visualisation would be valid.
I believe the question on filtering would be based on how you interpret it, but I would say that if a country is producing no power, then you shouldn’t include it in a list of countries that do produce power, and so should filter it out.

All the best,
Peter

I feel that this visualisation conveys information well, in my opinion another visualisation along side this one is not needed. I’d personally alter the colour palette slightly to make Gas and Oil more distinct, it can be more difficult to read compared to the other fuels. In terms of the irrelvant fuel types that may appear as zero, I’d recommend filtering out these values as they’re difficult to read due to their size.

Thank you both for your responses, I have changed the colours of Oil and Wind to make different fuel types easier to distinguish and also filtered off the fuel types giving no power.
Furthermore, after adding some additional features, I am happy with my visualisation now.