I’ve got a quick side-by-side stacked bar chart here that I’d like an opinion on. I retrieved the data from Project Tycho to work on for an assignment on information visualisation. A brief description of how I compiled the visualisation follows. 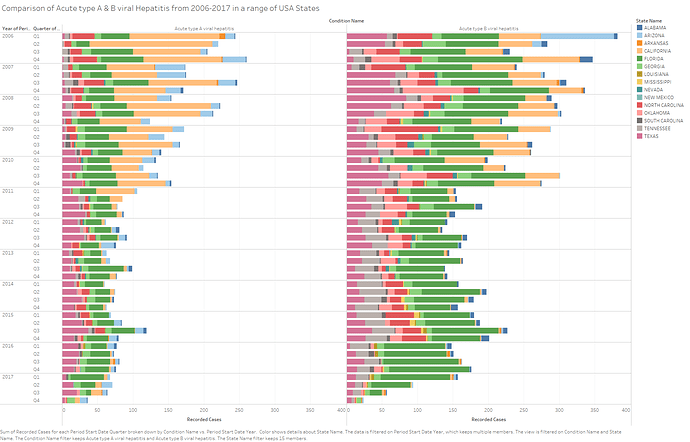 Tableau was used to generate this image.

The data is for fifteen different states from the United States of America.

The diseases shown are acute viral hepatitis, both type A and type B.

The data is mapped to two different stacked bar charts based on disease. An individual colour has been assigned to each of the represented states, and can be seen on the key to the right. The size of the bar is the total count of recorded cases, as shown on the ‘x’ axis, during a single quarter of a single year, as shown on the ‘y’ axis.

We can observe from this that there has been an overall decline in recorded cases of both acute hepatitis type A & B. Hepatitis B has a much faster decline than hepatitis A, however, we must also make note of the fact that due to the lack of recorded cases in California that the data set itself might not be complete.

The data was acquired from the Project Tycho site and imported to Tableau without alteration. Within Tableau I altered the headings of several fields to improve readability.

Does the graph show a good trend to support my observation?
Or does the lack of Californian data later in the decade pose a problem?
Do you have any suggestion on what I could add to display the information clearer?

Hi!
This looks like a good visualisation as it clearly shows the trend of a decline in the number of cases for both diseases!

I believe the data does support your theory that Hepatitis B has declined faster than Hepatitis A over the WHOLE time frame. However Hepatitis A appears to initially decline faster until 2012, and Hepatitis B seems to increase while A seems to increase too but to much less of an extent, perhaps there is some correlation here? From this point onwards before they both reach their lowest levels in Q4 of 2017.