I am a student who has been tasked with exploring the Project Tycho data set and producing various different data visualizations to help better understand the data. Below is one of those visualizations; A map displaying the spread of malaria across the US in 1954 for the civilian and military sub-population. 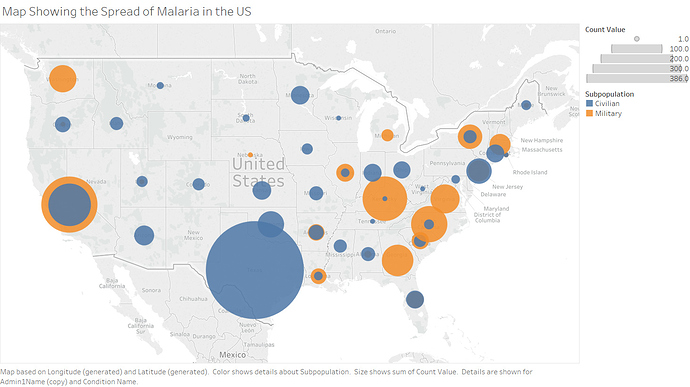 Unique Observation: As we can see, in 1954, Malaria was particularly focused on the coast of the US (especially the east) with very few cases recorded inland. Furthermore, with the exception of California and Washington, almost all the military cases fall in along the east-coast of the US whereas the Civilian count is far more varied.

Data Preparation: Using data query on the project tycho website, militay and civilian should be selected under subpopulation and then malaria under condition. AdminName1 was also converted to a geographical type of US states.

My question is this:

Is there a better way to visualize the difference between Military and Civilian spread of Malaria across the US, as I feel the current method which uses solid circles could be a bit difficult to observe.

I would definitely say this visualisation map could be improved. Firstly, The solid circles block the names of each state. Although this can be common knowledge, it would still be informative for any user trying to understand it. Secondly, you could simply split your visualiasation into 2 separate maps, in a matrix format, which are viewed side by side.